What Churchill Teaches Us Through Life’s Wilderness

In the Spring of 1929 when the Conservative Party lost the General Election in Great Britain and the 54-year old Winston Churchill stepped down as the Chancellor of the Exchequer, he had served in every major British Cabinet post except Foreign Secretary and Prime Minister. Churchill was never popular with the Conservative Party’s rank and file or its leaders thus he became marginalized throughout the 1930s leading up to World War II. He was in his wilderness. 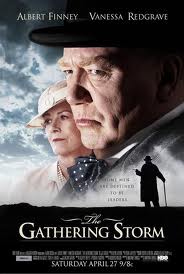 These “Churchill wilderness” years are well represented by history books but my favorite portrayal of him on-screen during those years was by Albert Finney in The Gathering Storm (2002). In the movie, despite his political impotency, Churchill is the one of the few who most clearly (and accurately) sees Hitler’s Germany rearming and rising as a threat. By speaking up he becomes marginalized and dismissed as a war-mongerer. In addition, during those years he was having financial struggles and left to determine if he had any life left in him politically. Those were the years of building strength and courage to prepare for what was coming, the gathering storm. Thank God that our brave Sir Winston survived those years as they helped to fully develop the man who would lead (and arguably save) Britain in World War II.

Churchill brings encouragement to me in my wilderness. I have felt lately that I’m in it as well and trying to figure out a next stage of life and what God wants next for me. I am so thankful for this time because I can see God working despite not knowing the ending of this chapter. From one wilderness to another, Churchill is still teaching me. I am thankful for this wilderness.

The wilderness teaches us to

Great stories are written in wilderness. Embrace it.

You will be better because of it. We all will.