9/11 and the Pipe Dream Drive to Work

In a few short weeks we approach the anniversary of a tragedy that most of you reading this remember well.

I didn’t know anyone directly who perished on 9/11.  I still feel for them and pray for their families.  I pray that I am living better because of what we have learned from that day.  I now am married and have two little girls and when the time is right, I will share what happened on that fateful day and what we all have learned from it.  My parents had shared where they were when hearing that JFK was assassinated and their parent’s experience when hearing about Pearl Harbor being attacked.  Each generation had its defining moments.  In my early 20s, I wondered if my generation would have that kind of moment.  Before 9/11 I remember vividly the following events; The Challenging exploding in 1986, Operation Desert Storm in 1991, Black Hawk Down in 1993 (occurred on my birthday), and yes even Bill Clinton’s speech acknowledging his indiscretions with Monica Lewinsky.

I had only been working in my new job out of college for a few months when the 9/11 attack happened.  My routine each day was a 10 mile drive toward downtown St. Louis.  My routine was filled with two cups of coffee, one at home, one for the ride to work and I would listen to talk radio.  On 9/11 the routine was broken.   My car had broken down the day before so I borrowed my parent’s car.  Instead of the daily radio talk, I put in Travis’ new album The Invisible Band and listened. Perhaps nothing for anyone was routine following 9/11.  I would have listened to the live reporting of the attack on my drive in but instead was in some other world.  I learned immediately when I entered the door at work from a colleague that planes had hit the towers.  We had a person from our New York office visiting us that day and she was emotionally distraught not knowing if her loved ones were okay (She learned later that they were).

The next morning, I took a look at lyrics from one of my favorite songs on that album that I listened to that fateful drive to work.  It was the song, Pipe Dreams.

Very few things were ordinary about 9/11.  What had you heard on that day?

The day after 9/11, I like many still went to work.  No music today  as I paid close attention to the talk radio.  It was full of fear, confusion, sadness, full of messages about economic demise, and anger.

My office was a half a mile down the street from the UPS central depot in St. Louis.  If I was just a little late getting to work, I would be stopped by the trucks leaving for their daily delivery route.  On the normal day, I would have been extremely annoyed if getting caught by these trucks.

On 9/12,  I was stopped by those UPS delivery trucks.  I sat in my car cheering for 30 UPS trucks leaving their depot.  I was not alone and saw several others doing the same.  Were we cheering for giving terrorists the finger and that economically we would not slow down?  Not really.  It felt more like a symbolic way that people were willing to keep moving forward even after being knocked down.

Ask any boxer about this feeling.  You get hit.  You get knocked down.  You get back up and fight.

My responsibility as a human being living during such a tumultuous period is to share the lessons we have learned.  I wonder how we will remember 9/11, 50 years from now?  Unfortunately events like these could probably happen again in some fashion.  My daughters’ generation will have defining moments but may they learn from 9/11, JFK, and Pearl Harbor an important lesson I learned as well as my parents.

We must keep going forward. 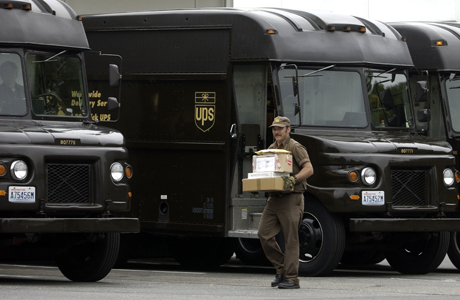